Nine months into the trip and we’ve hit the Tanzanian coast, hallelujah! The wait rewards us with coconut fringed white sand beaches and layer upon layer of crystal blue water, the kind of beaches you see on billboards in London tube stations when it’s pissing it down with rain and has been dark since 3 pm. To my joy, we are also now amidst Swahili culture, where seafood abounds, more spices are used, and coconut is king.

So, it’s only right that the first ‘coast post’ is a recipe that has creamy coconut running throughout. The recipe is a favourite of Moba and his best friend and business partner Afro, who together run Afro Whale Shark Safari and Afro Beach Bungalows on Mafia Island. Moba explains that it’s the addition of coconut to the prawns that makes the dish ‘Swahili’. The masala is a recent addition to the recipe, added for tourists who complain about the dish smelling fishy. When Moba cooks for his family he doesn’t add the masala, adding whilst laughing and looking at his friend Afro, “and when I cook for Afro I don’t add any hot spices, because it makes him go straight to the bathroom!”.

Coconut trees are everywhere on Mafia Island, shading the coastlines, dotted throughout villages and lining the  sandy paths criss-crossing their way within the island. As one Mafian explains to me ‘the coconut is our lifeline, we use every part of it’; when the coconut is young they drink the water and eat the jelly-like flesh; older nuts are grated, soaked and the milk used in cooking; fibre around the coconut is stripped, dried and made into rope; used shells are burnt to make charcoal or into beads for jewellery; palm leaves are woven together for matting, walls and roofing; and the strong wood is used for furniture and house building.

Moba and Afro seem like are an unlikely pair of friends, Moba is neatly dressed and clean shaven, the calmer of the two with talk of market strategies and business planning. Afro has scatty dreads, wears board shorts and hoodies and is more of a hot-head, “sometimes Afro gets very upset by something and starts to panic, but you have to talk to him gently to make sure he calms down and doesn’t make any rash decisions”, Moba explains.  They met ten years’ ago when Moba taught Afro some computer skills.

Despite both being born on Mafia Island, the two friends had different upbringings. Moba was sent to boarding school in Dar es Salaam where he got a reasonably good education and was exposed to life in the big city. He didn’t like the traffic jams, crowds of people and stress though and was always glad to go back to Mafia in holidays where the pace of life was much slower. To begin with he would work on his family farm during school holidays, but slowly he got more involved with the tourists who had started coming to the small island to swim with the whale-sharks, which Mafia is famous for. By the time Moba finished school he was working as a manager for a guest lodge on the island.

Afro had a less stable upbringing, he doesn’t go into detail with me but just says “some was bad and some was good, but thanks to God everything is fine now”. He taught himself to swim when he was a teenager so that he could reach the fishing boats as they came in, getting the first pick of the day’s catch before selling them on the streets. Good networking as a fish vendor allowed him to become a fisherman, going out all night on the boat and sleeping all day on the beach. Whilst he was a fisherman Afro had dreams of working with tourists and spent time trying to improve his English by talking to some of the tourists on the beach. Eventually, a man called Captain Libe, who runs a successful Whale Shark business on the island, noticed Afro on the beach “as a good man” and asked him if he wanted to join his team as a guide.

Under the watchful eyes of Captain Libe Afro learnt about whale-sharks, guiding and what tourists want. Over the years Moba and Afro started working together, Moba using Afro and Captain Libe to run whale shark safaris for guests at the lodge he managed. All the time their friendship and bank balance was strengthening as they started saving money.

After 6 years with Captain Libe Afro and Moba were ready to cut loose and set up their own business ‘Afro Whale Shark Safari’. Combination of Afro’s experience as a guide and connections with fishermen and Moba’s experience with the tourism industry meant that business went well. Three years’ later and with only $150 between them they built ‘Afro Beach Bungalows’. Thanks to their drive and friendship both men are now able to employ family members at their business as well as people who would have otherwise been ‘beach boys’. “And what is your friendship like with Moba now?” I ask Afro, “Moba isn’t a friend anymore, he’s my family”, he replies.

*A note on the coconut and how its prepared: watching how the coconut milk is prepared was one of the best things about this recipe. The coconut flesh is grated using a special stool that is used all along the coast of Tanzania. Once grated a little water is added to the grated coconut to extract the milk, the mixture is then squeezed through a sieve, the milk is kept for cooking and the grated coconut discarded.

** If you’re interested in visiting Mafia Island on a budget, read this excellent blog by the Ordinary Adventurer on how to do it. 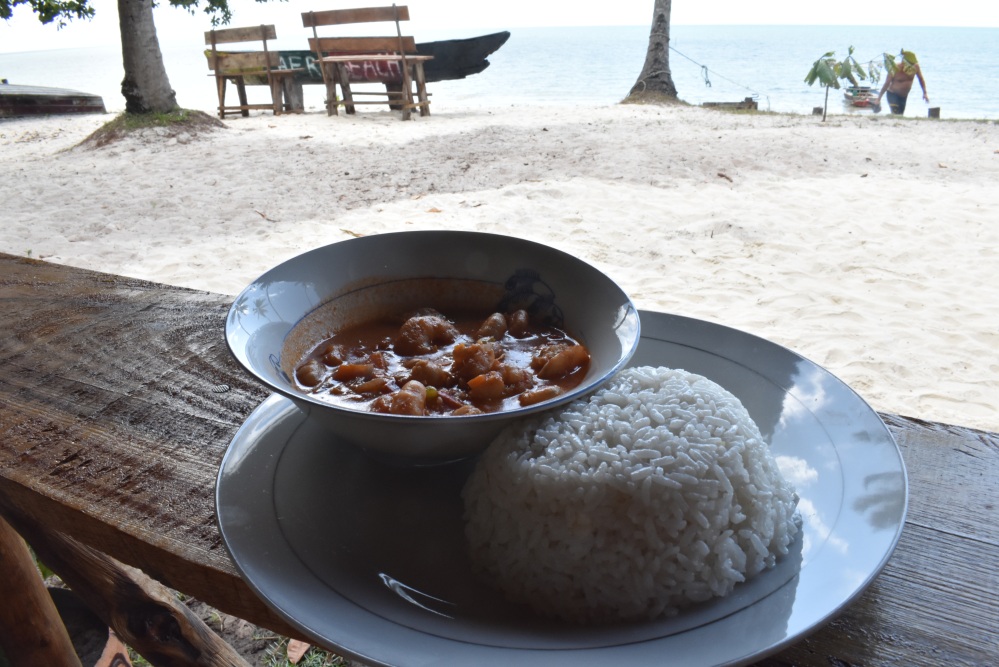 Place the prawns into a large saucepan and add to them the grated garlic and ginger, masala, pepper and salt. Place the saucepan on a medium-high heat and leave to cook with the lid on. After about ten minutes give the mixture and leave to stay warm on the side of the hob.

Soak the white rice in water to remove the starch. Rinse and repeat a couple of times until most of the starch has been removed.

Put the coconut milk in a saucepan along with a pinch of salt and bring to the boil. Add the rice, stir everything together then leave to cook with the lid on. After five minutes check the rice and add more coconut milk, continue to cook with lid on on a very low heat for a further 30 minutes.

Now prepare the rest of the vegetable by grating the garlic and ginger and finely diving the pepper, carrot, onion and tomatoes.

Place another saucepan on medium-high heat and add a little oil, add the garlic, onion and ginger and cook for a few minutes. Next, add the carrot, pepper, then tomatoes, allowing each to cook a little with the rest of the mixture before adding the next ingredient. Finally add the tomato paste, stir everything together then leave to cook with the lid on for five minutes, or until all the vegetable are cooked.

Add the spiced prawns and coconut milk to the vegetable mix, taste and season. Leave to cook slowly on low heat for five to ten minutes.

Serve the rice and prawns together on a plate along with a few wedges of lime and pieces of chilli for the spice lovers.

Liking this blog? Don’t forget to subscribe following the link below.

This site uses Akismet to reduce spam. Learn how your comment data is processed.