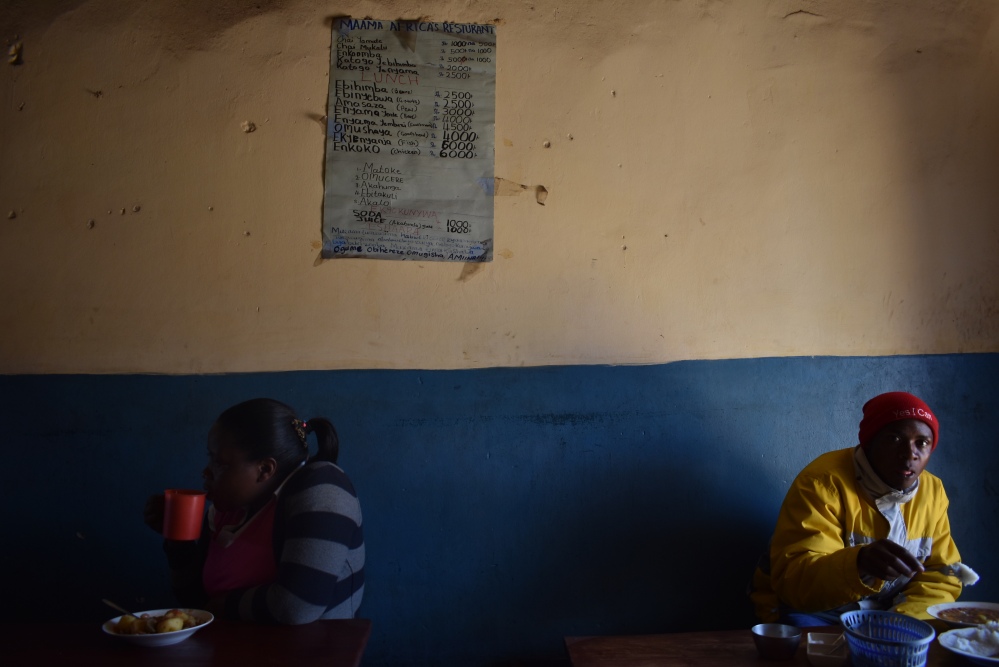 It may not seem like an obvious place for it, but the street food scene in Uganda is live and kicking. Town centres, bus stations and roadsides are full of people selling chapatis, grilled chicken, maize and a glorious bounty of fruit and vegetables – avocadoes bigger than your hand or seven different types of mango. Young men wander the streets with buckets of mendazi, sambusa and boiled eggs, and women sell sim-sim (as sesame biscuit), peanuts and fried maize by the bag.

If you need something heartier, behind every market is a treasure trove of very cheap, local restaurants. If you’re in Kampala then the Kamwokwa Market close to Fat Cat Backpackers is a good place to start. Women have several pots full of posho, matooke katogo, beans, meat stew or g-nuts with fish, all boiling away on charcoal stoves whilst workers sit at the communal table and benches eating their food. Wash it down with a glass of fresh cocktail juice and you will be very satisfied. 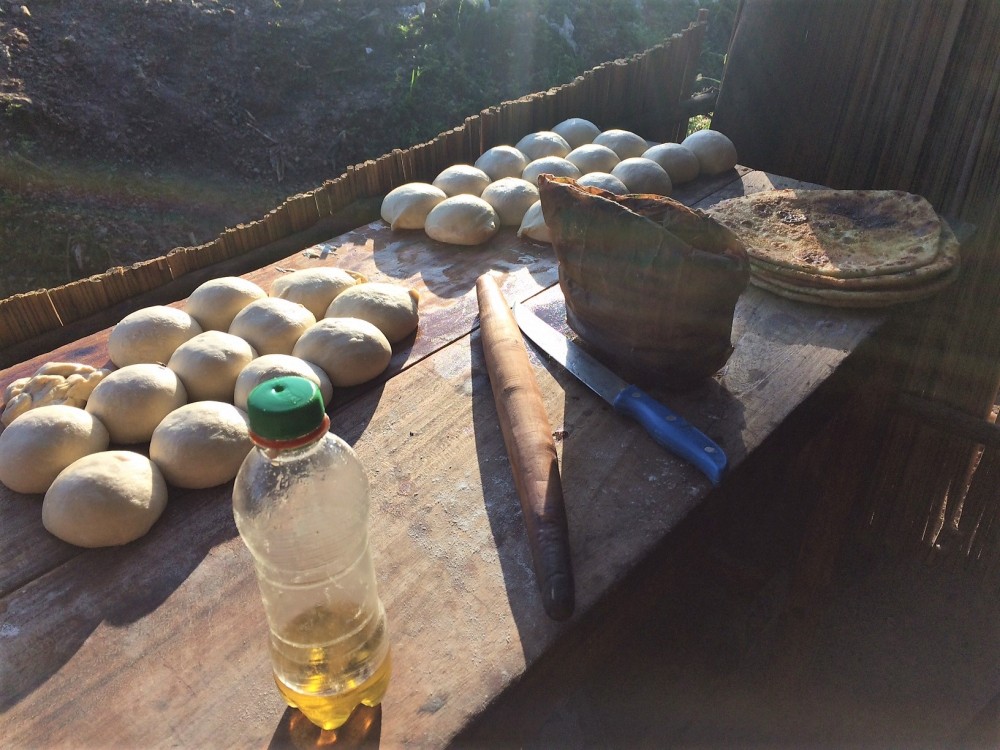 Chapatis are eaten all over East Africa and Uganda is no exception. In every town and on every roadside you can find men rolling out and frying chapatis from the early hours. They are pretty filling and cost around 500 UGX. Best eaten fresh. 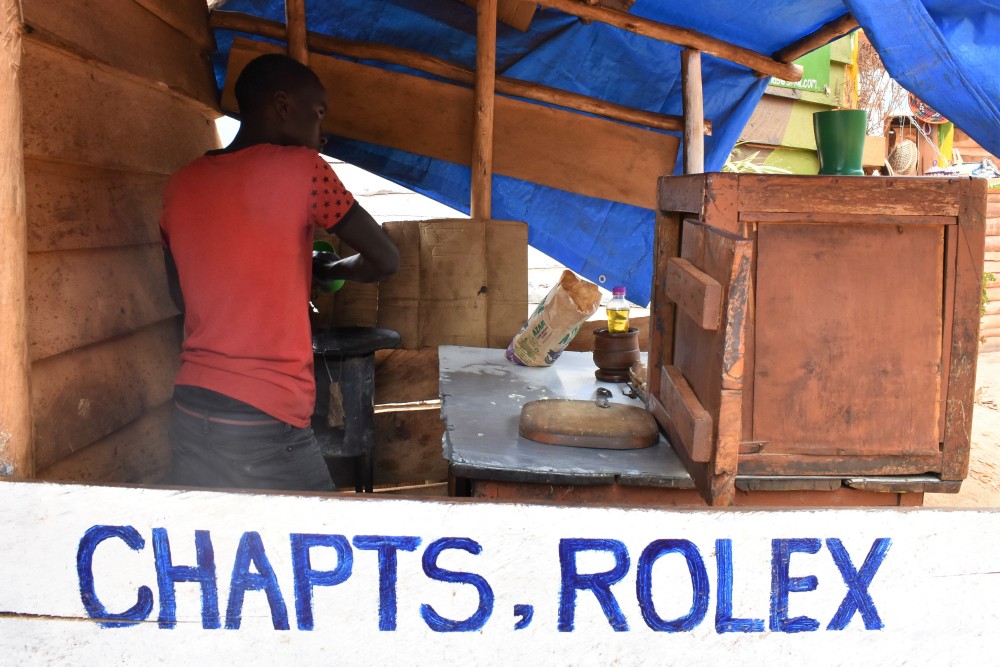 Whilst chapatis can be found all over the region, only Uganda has the unique ‘Rolex’ – an omelette (usually with tomato and cabbage) rolled up in a chapati and eaten like a wrap. The snack is such a symbol that the country even has its own annual Rolex Festival.  Greasy, but fills a hole at the end of the night. Around 1500 UGX 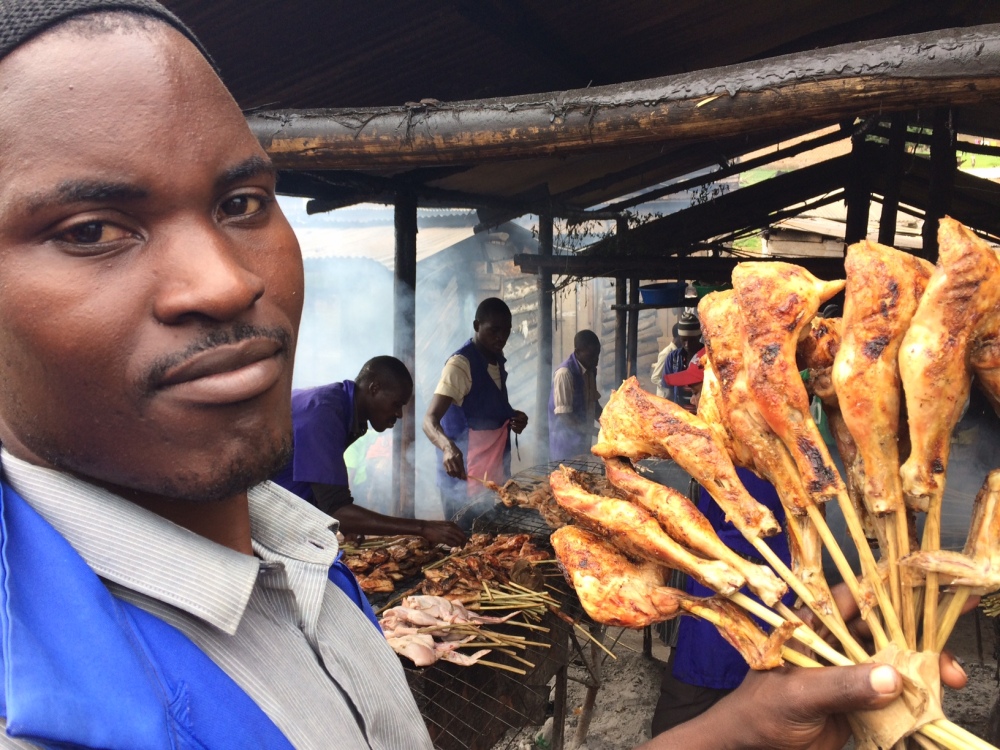 All over Uganda there are local authority owned ‘service stations’ run by local men and women. Chicken legs are grilled over hot coals and sold by the hundreds every day.  A more expensive snack at 2500 UGX, but if you want cheaper then they also sell chicken gizzards. 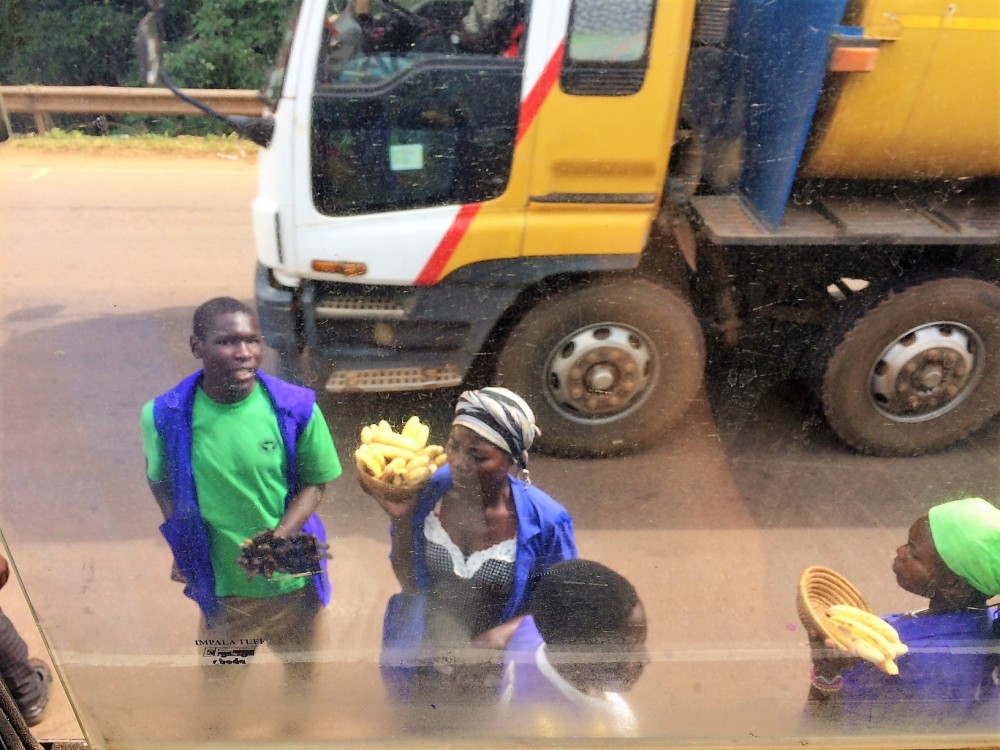 Also sold at the service stations are  these ‘genjo’ bananas, which are grilled. You can also buy grilled cassava and tastes great with a bit of salt or piri piri powdered over it. 200-500 UGX 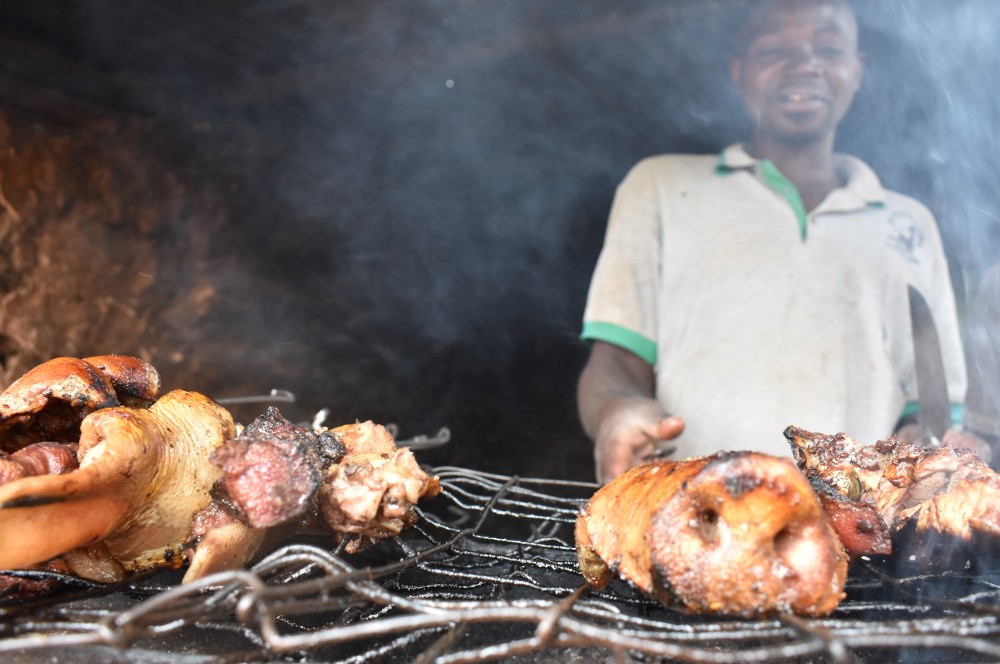 Pork joints are the place to go for a proper sit down meal (2kgs pork with sides cost 25000 UGX) but if you want something on the fly (and aren’t picky about which part of the pig you’re eating) then head to the road-side grillers for a skewer at about 600 UGX. 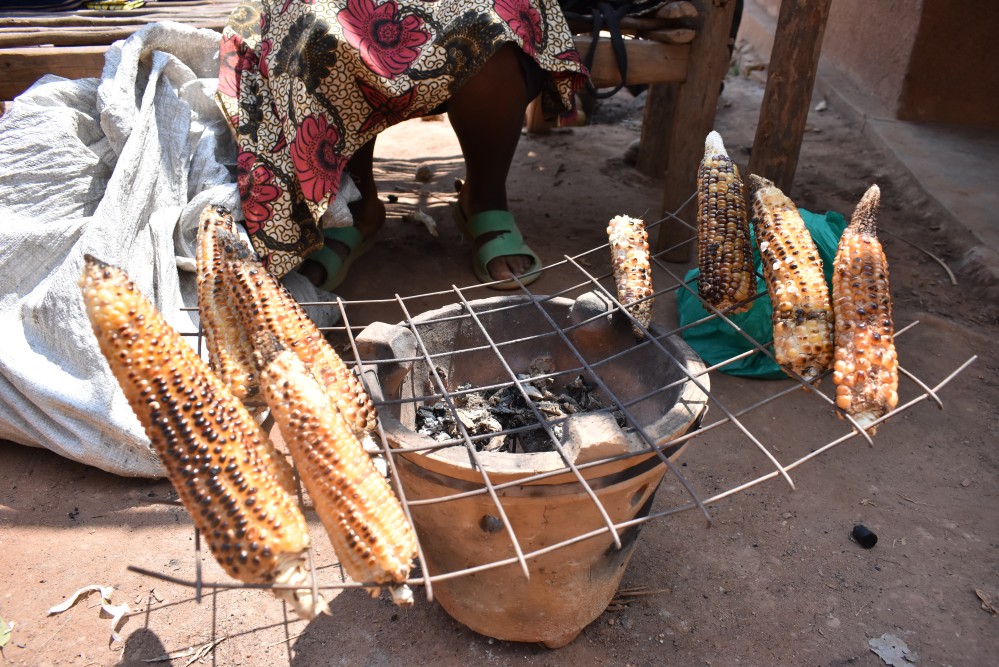 Maize, sold by women in towns, behind markets and along the roadside. They are much drier and less sweet than the corn of the cobs in the UK, but a relatively filling and healthy option. 500 UGX 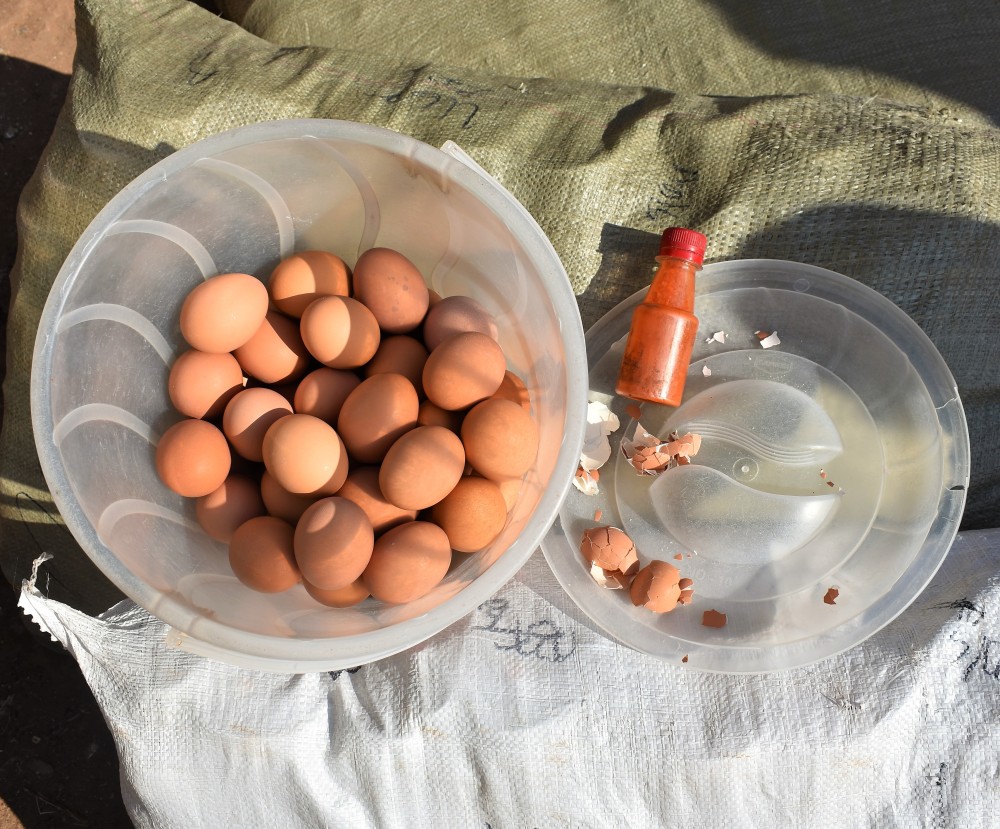 EGGS! Young men carry around buckets full of boiled eggs for 100 UGX each. They helpfully wait whilst you peel your egg and add some salt or spicy pepper. You’re most likely to find them at bus and taxi stations or walking round the markets. 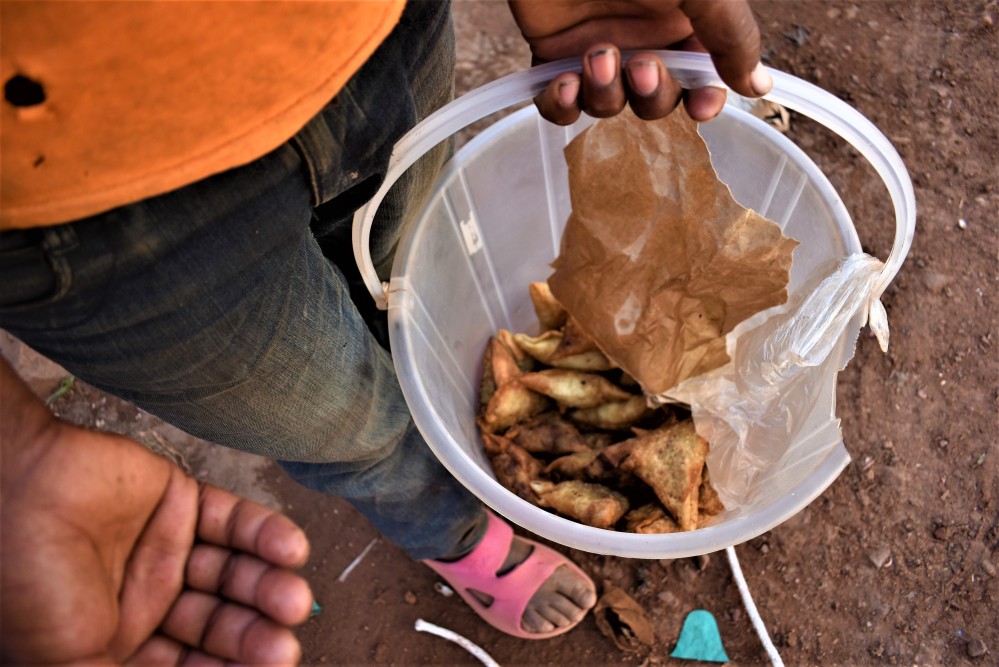 Sambusa – a version of the Indian ‘samosa’ and found in many parts of East Africa. The Ugandan sambusas mostly come in two varieties 1) mince meat and a bit of spice 2) cow peas and onions. Between 200 – 500 UGX. 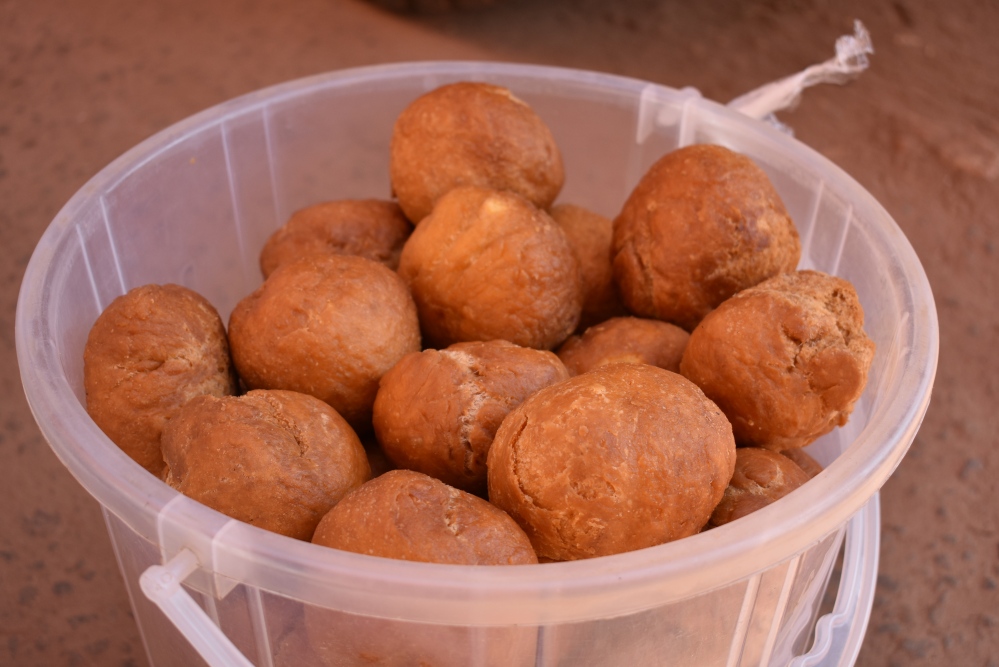 Mendazi, again, found in most East African countries and are a deep-fried sweet dough ball. They’re commonly a morning snack and mostly sold around the markets and bus stations for between 200 – 500 UGX. 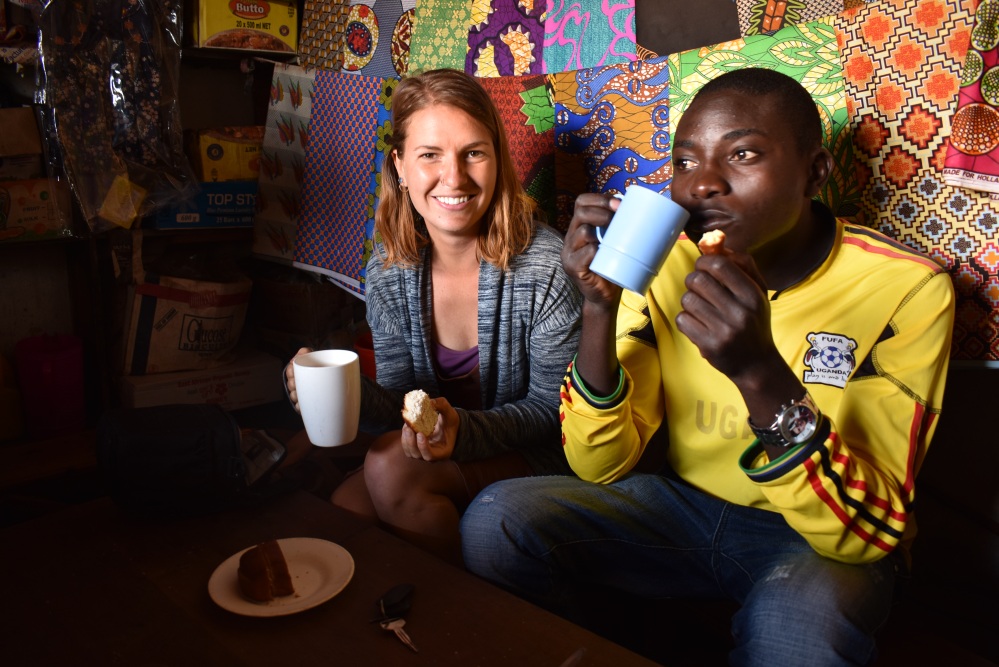 Lots of little chai shops are open only in the morning serving African tea – a sweet milky tea made with ginger and other spices. Most chai stands will also have boiled eggs, mendazi and sambusa for sale on the counter. 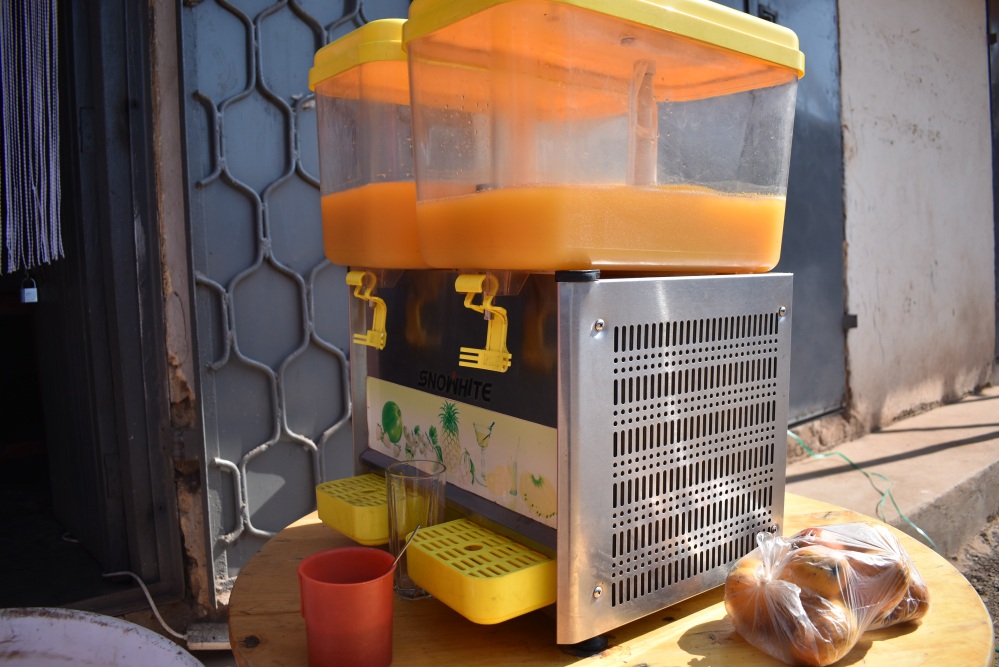 ‘Cocktail juice’ is for sale in most local restaurants and cafes and is usually a mix of two of the following – passion fruit, orange or pineapple. If they’re making it fresh then (if you want) ask them not to add sugar. 1000 UGX 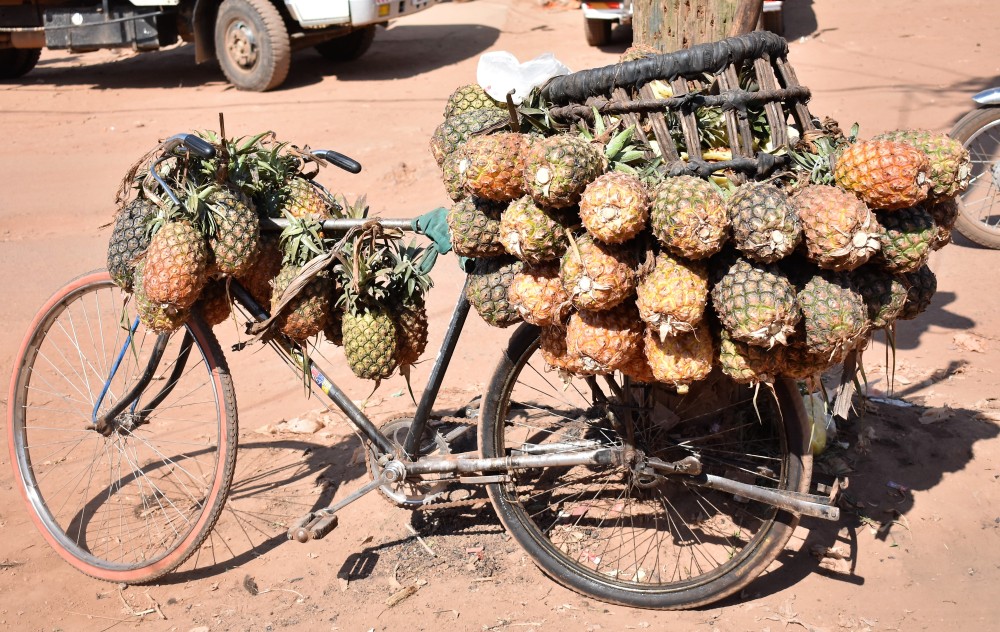 These don’t need much introduction, but well worth a mention as the pineapples in Uganda are the best pineapples I have ever tasted in my life. Men push bikes like these around the town all day, and are relatively easy to spot, but if not then head to the market. Range between 1000 and 2000 UGX depending on size. 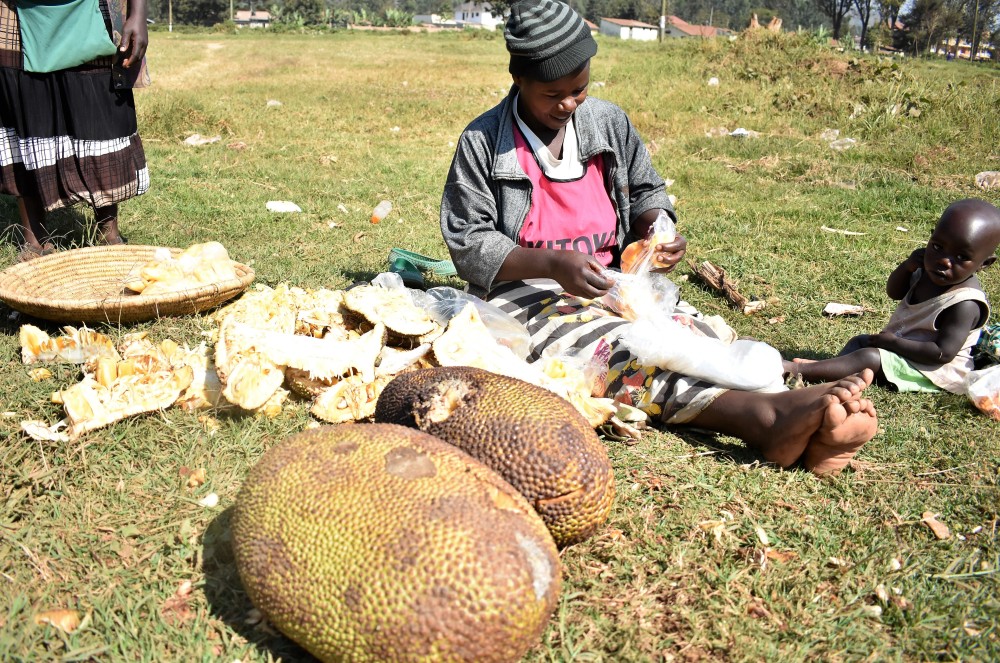 Jack fruits are weird, smelly, sticky alien fruits that completely won me over (because of all the above). The fruit itself tastes astonishingly like candy. They are notoriously sticky so if you don’t want to deal with the fallout then you can buy pre-prepared bags of the fruit and eat it daintily with a cocktail stick. Not cheap though, about 1000 UGX for a small bag. 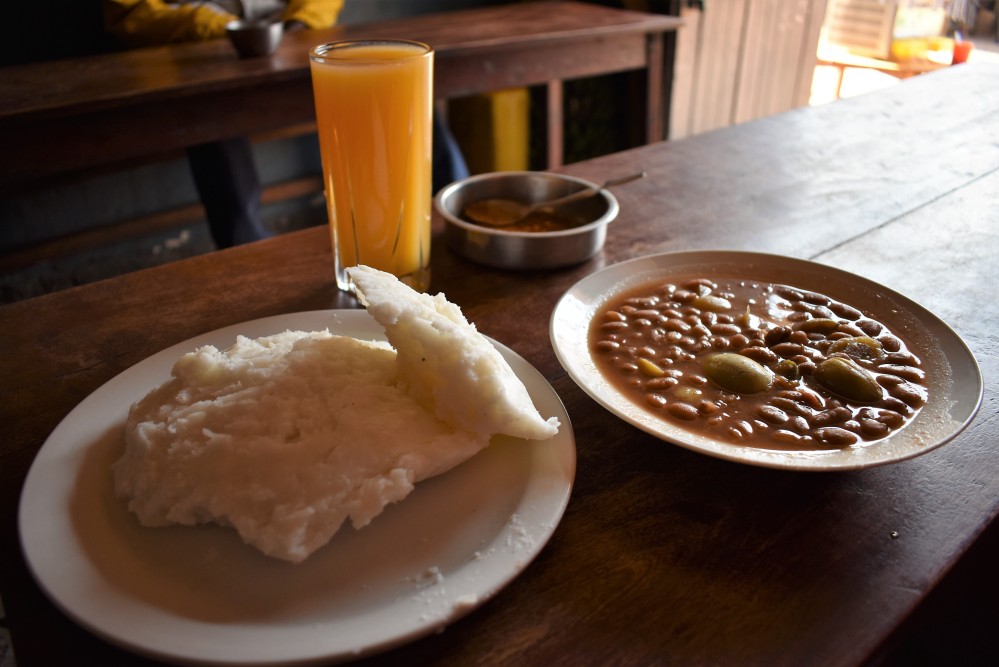 You can get hearty and cheap meals like this for 1000 – 2500 UGX in most local food places. Posho and beans (pictured), katogo, goat stew, g-nuts and fish usually frequent the menus. 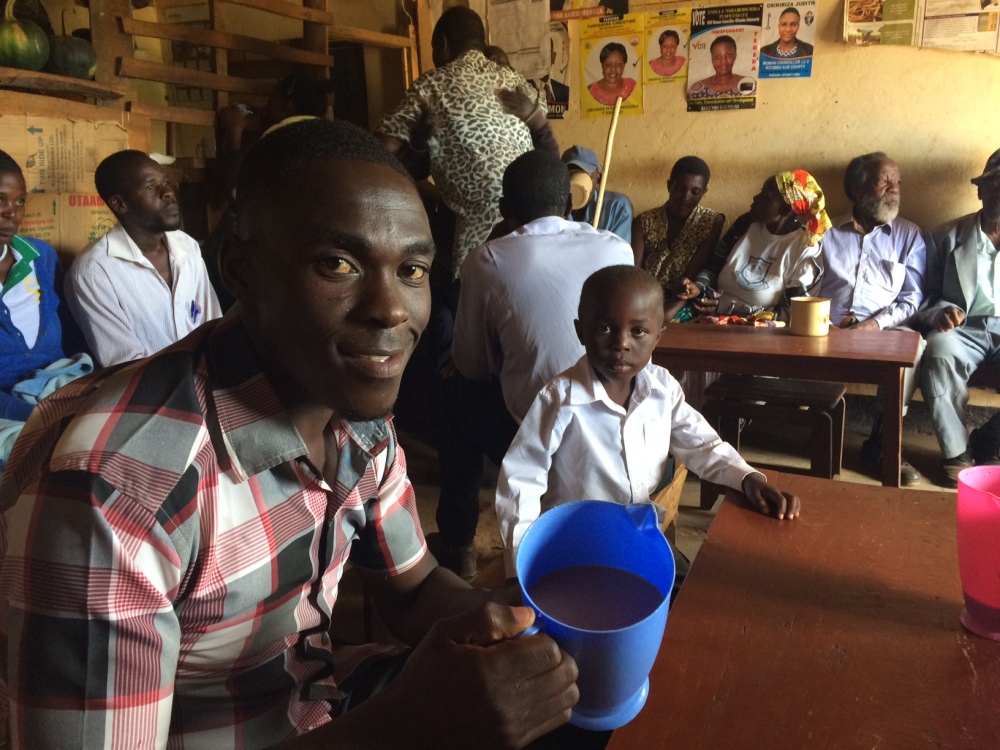 If you want to get pissed on the cheap then head to a local bar for ‘bushera’ a home-brewed beer made from fermented sorghum. It’s also confusingly called porridge, which is essentially what it is. It’s also very filling, so if you want something lighter try the banana beer, made from matooke. Bushera is 500 UGX for 1 litre and Banana Beer more like 600 UGX. If you really like it, a drinks company has now started selling it in supermarkets. 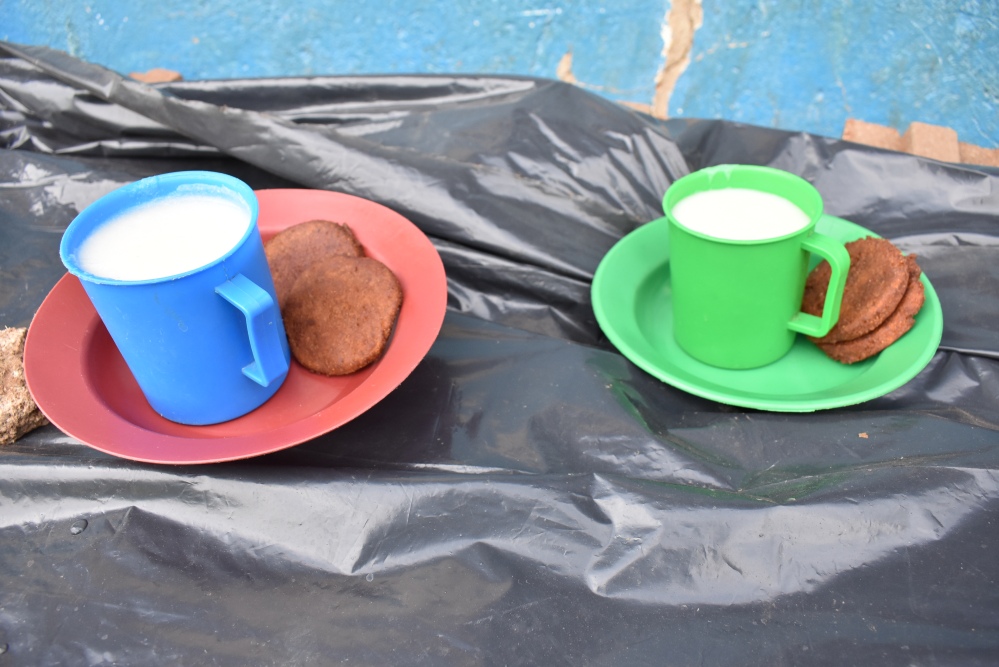 A common breakfast  in Uganda is sweetened maize porridge with ‘pancakes’ that are made from millet flour and bananas. The pancakes can be bought separately from markets.

Want to read more posts like this? Then don’t forget to follow the blog using the button below.

This site uses Akismet to reduce spam. Learn how your comment data is processed.